Not all change is alike

After the opening session at the Kanban Leadership retreat in Portugal it is clear that change is again a big topic at the retreat. Mike Burrows’ session proposal is on visualising change (have a look at his recent blog post). Pawel Brodzinski’s proposal is on investigating what the preconditions are for using Kanban successfully, and how to avoid cargo cult when introducing Kanban (a recent blog post of Pawel). The Kanban Method, as a method of change, in itself seems to be perceived as a change that may lead to resistance and all the side-effects that go along with it.

My own proposal is a call for a finer grained understanding of what change is – and a recognition of the fact that not all change is alike – as a prerequisite for both visualisation and understanding the pre-conditions for any type of change. In plain language this latter means that change is in the eye of the beholder. As a community we can discuss at length why or why not certain changes are difficult to accept or not. The truth of the matter is that the only group of people that can reasonably give an indication of how “difficult” or not a change is, is the group of people that is subject to the change. All change contains an internal tension. Acceptance of the change calls for respect for the identity, absorption capacity, needs and wants of the ones that are subject to the change. Deep systemic improvements may call for divergence and substantially moving away from the status quo.

Thomas Kuhn in his ground breaking work “The Structure of Scientific Revolutions” has made a very detailed analysis of “change” in the history of science. His work can teach us some important lessons.

Kuhn makes a distinction between two types of change. The first type of change is revolutionary change. It is the type of change that involves a certain sort of reconstruction of group/community/organizational commitments as it challenges the prevailing climate, involving an unfamiliar perspective of both problems and solutions. Revolutionary change is sometimes also called paradigm breaking change as it challenges the existing paradigm that is shared by a group of people.

The second type of change that Thomas Kuhn points out is cumulative change. Cumulative change stays in line with existing commitments and the prevailing climate. It is also sometimes called paradigm consistent change. 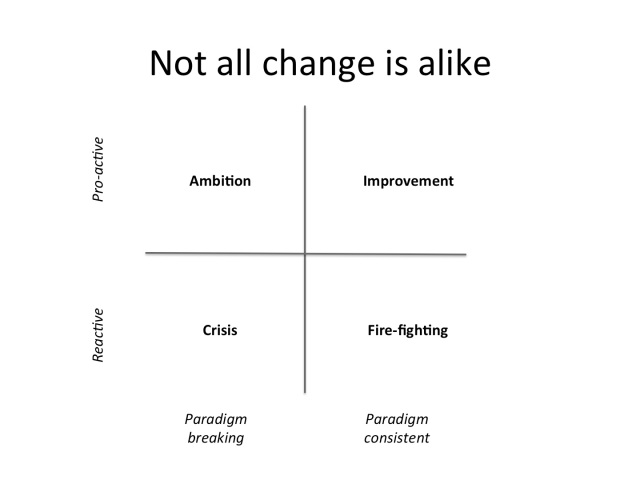 The above analysis can be used as the basis for a framework for making sense of change. In fact I use such a sense-making framework when I introduce change in a group of people. The change is broken down into smaller parts that then can be analysed with the above framework. It gives me an indication of how the change is perceived by those that are confronted with it. It allows me to adapt the order and strategy for introducing the change in that group of people.

Since every organisation is unique the sense-making framework is best tuned to the specifics of the organisation. Not every organisation uses the same terminology, for example, and you do not want to let this get in the way (in the above framework, for example, the reader might prefer another terminology). This can be done by means of a workshop to construct archetypical changes based on stories of the participants. Doing so makes the participants aware of the fact that not all change is alike and that different types of changes require a different strategy. The different types of strategy for the different types of change deserves a separate discussion. I just want to note here that in my opinion pro-active change is best served by an evolutionary approach (as advocated by the Kanban Method).

2 Responses to Not all change is alike